It's getting cooler here as we approach winter. So it's lucky Nanna and Poppy brought some nice winter PJs for Patch. Sorry for the blurry photos, Patchy doesn't stop these days! 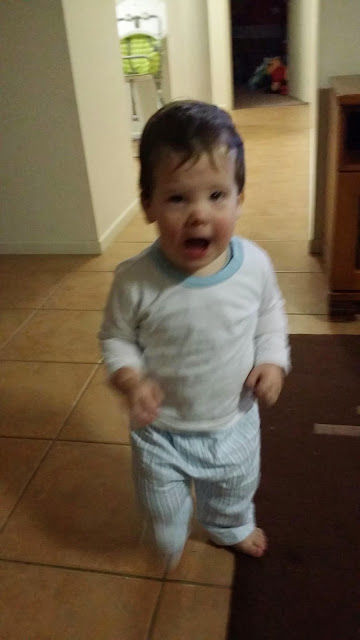 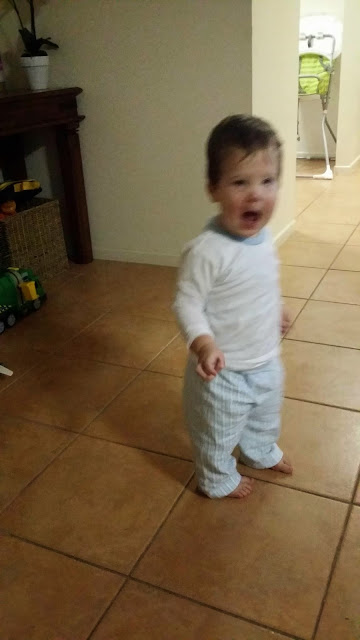 Posted by Kacey at 4:32 AM 113 comments:
Email ThisBlogThis!Share to TwitterShare to FacebookShare to Pinterest

Every Easter we head to my parents beach house for the weekend. It's not the flashiest house but it does have a toilet, shower and hot running water. There aren't any bedrooms so we convert the lounge room, dining room and any other patch of floor as a place to sleep. We do have a bunk bed the older kids sleep in, a roll out mattress my sister, brother in law and three month old baby sleep in, a futon BJ and I sleep in, my parents sleep in the only permanent bed and two portacots the babies sleep in. No wonder there isn't much room left!

We didn't go at Easter time last year because Patch was only six weeks old but we did go down in June last year, so it wasn't the first time both boys had been but it was the first time they were both walking and talking. It was great, especially watching James. He wanted to participant in everything that was going on! He's still a bit small to ride in the boat yet but he did go for a couple of tractor rides with Poppy and his seven year old cousin. And both boys loved just sitting in the tractor and pretending to drive it!

We had the whole family together (the first time since my Nanna's funeral in January) including my nieces who are seven and one and my three month old nephew.  That means in the house we had five kids and six adults, while my brother and his girlfriend camped outside. So you can imagine how difficult it was during the night, once one baby woke up their cry would wake one of the other babies up. But we only had one rough night and the days were great.

I can't wait until next year when all the kids are just that bit older and we can go in the boat and go fishing off the beach!

Posted by Kacey at 2:47 AM 31 comments:
Email ThisBlogThis!Share to TwitterShare to FacebookShare to Pinterest 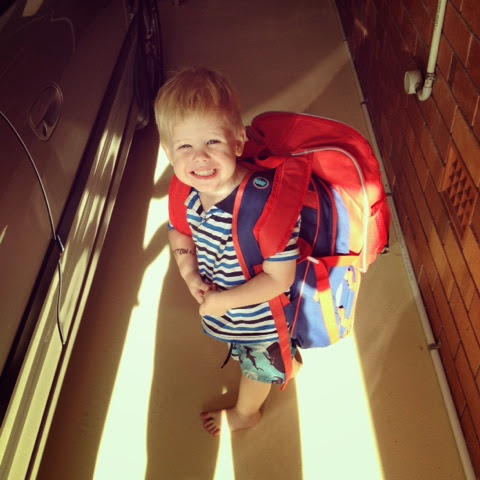 Posted by Kacey at 4:49 AM 18 comments:
Email ThisBlogThis!Share to TwitterShare to FacebookShare to Pinterest 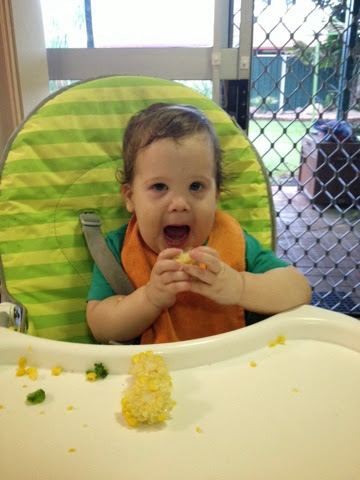 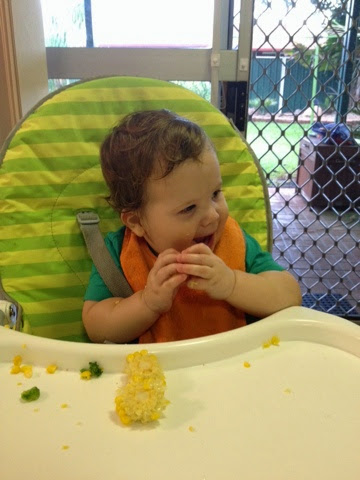 Posted by Kacey at 4:00 AM 5 comments:
Email ThisBlogThis!Share to TwitterShare to FacebookShare to Pinterest 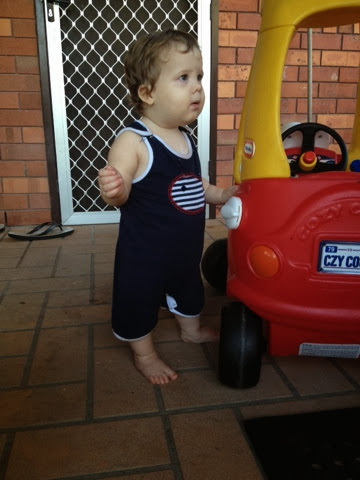 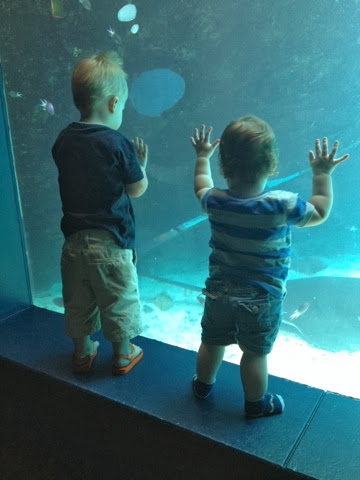 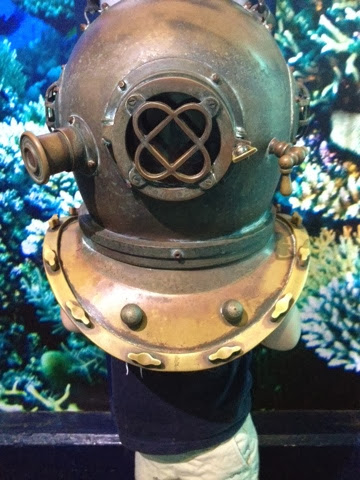 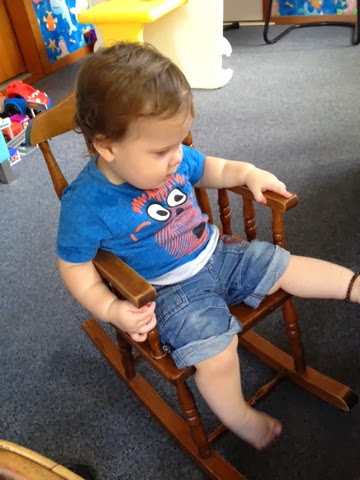 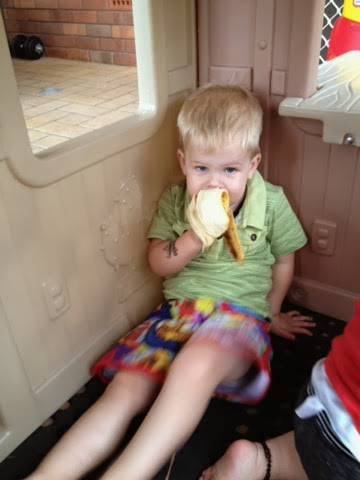 One year old tantrums, aren't they adorable! Just love him to bits! 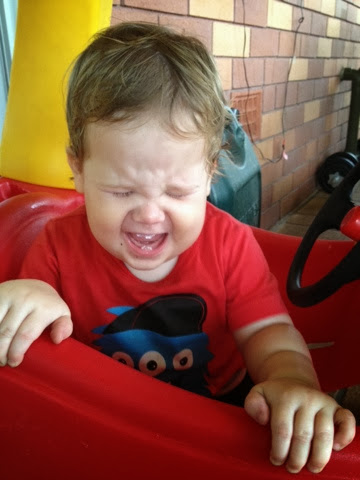 Posted by Kacey at 5:13 AM 3 comments:
Email ThisBlogThis!Share to TwitterShare to FacebookShare to Pinterest

My dear Patchy
It is such surreal feeling that you are twelve months. You have come from this tiny infant into a larger than life, robust, busy one year old. Unreal! While I was getting the decorations ready for your party, I had all your monthly photos printed and hung as a poster. Some months your have really put on the weight and others your have got longer. It's such a great way to see your twelve months.
In the past month you have continued to get faster and faster with your crawling. You are crawling full time now on hands and knees. You are still cursing around on the furniture and every now and again will only hang on with one hand and spin out so you can look at things around you or drop to your hands and knees to crawl away. A couple of times you have completely let go and stood on your own, usually when you are going for a drink or any type of food. Once you realise you are standing you get so excited you sit down. Once or twice you have even tried to take a step away from the furniture only to drop again. You get so excited about standing and even trying to walk! And to see you pushing the walker, you are usually in a fit of laughter. 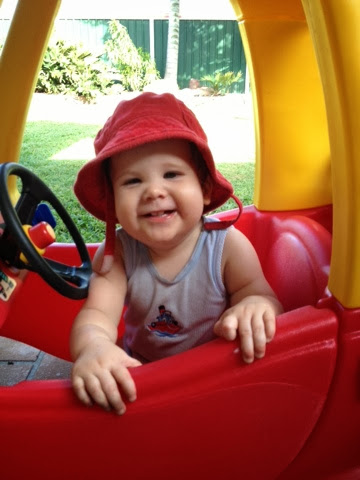 Your favourite thing for the past couple of months would have to be crawling under the dining room table or James' small table and chairs and just sitting there. It's pretty cute to see you sitting under there with a big grin on your face. You also love to stand and push all the chairs around which is very noisy! 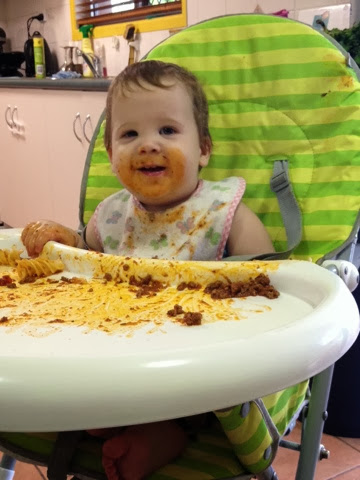 You continue to be a good eater and will devour anything put in front of you. The past two months you have become very independant and won't let anyone spoon feed you, so BLW it was. I was doing this for lunches anyway so now you started eating what we were for dinner as well. It makes my life a little easier since I don't have to make your dinners separately but I do have to watch what we give you in case it is a little spicy. You love any protein, especially steak or chicken, and have started to eat more veggies.
Now that you are twelve months I wanted to reflect over your different health issues since birth. I haven't written much about these but for my own memory I wanted a bit of a record. Since birth you have been a bit of a chucker. I always thought it may have been something to do with wind, as you seem to have a problem with bringing it up as an infant. As soon as you would lay down you would throw up or cry. I spoke to your Peadatriction at six months, who said it was normal for some children and you would grow out of it.  As you got older, you would throw up when you started to roll and move around and by six months you would throw up in bed at least three or four times a week. Sometimes a couple of times a day. At six months, when you were having solids more frequently the throwing up didn't stop and become more smelly. I was worried it was hurting you, so again I took you to the doctor. When you threw up, you would keep right on playing or doing whatever you were doing and wouldn't whinge or cry, so the doctor again told me you would grow out of it and it was just an inconvenience. It certainly was! If I forgot to put a bib on you, you would go through a few outfits a day because they would be soaked. And we would always need a rag handy to keep spew off ourselves or to clean it up. Over the six months since, you have a few good days in a row when you keep everything down and then a couple of days when you bring it up. Since moving to formula at ten months, I thought it would help but nothing changed. Now at twelve months the bad days seem to be a bit further apart every week so I'm hoping you will turn the corner soon.
The other health concern you had was a blocked tear duct. At two weeks, when you came out of hospital, we noticed your left eye was crusting over and weeping. We continued to clean it with warm salted water but the eye continue like this for a few weeks. At your six week check-up, I spoke with the nurse who told us it was a blocked tear duct. We were to continue to clean it and over time it would heal itself. And then one day at around five months it just stopped. Your little body just corrected and healed itself! 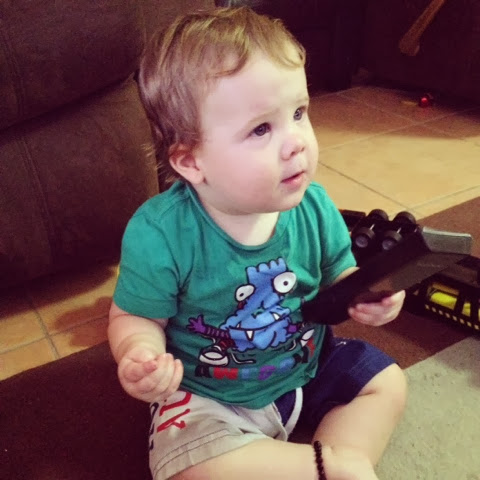 While I am a little sad at your first year finishing, I can't wait to see what else you have in store for us!
From the moment you came into this world and everyday since then, you have surprised us. You made our family complete and we love you so much! To our dear Patch, Happy Birthday. Hope you had a terrific day sweet boy.
Love always Mama and Dada. 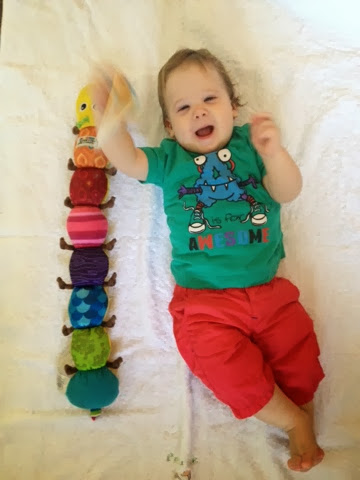 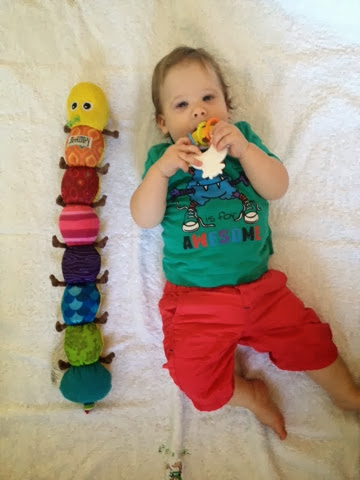 Posted by Kacey at 2:58 AM 43 comments:
Email ThisBlogThis!Share to TwitterShare to FacebookShare to Pinterest
Older Posts Home
Subscribe to: Posts (Atom)

Our TTC Journey So Far...

Mar 09 - Nothing is happening go to GP for initial testing for BJ. Bingo, problems with BJ's sperm. Advised to start taking multivitamins, wear boxes and stop the spas

Sept 09 - Still nothing happening, BJ tested again. No change. Referred to a FS for more testing

Dec 09 - Blood tests are normal but scans show a growth off my uterus. I'm booked in for laparoscopy and die test two weeks before Christmas. The growth is successfully removed, a small amount of endometriosis was removed and die tests come back normal

July 10 - Still not pregnant, go back to FS book in for IVF #1 for October. Start acupuncture and say good-bye to alcohol and bad habits

Kacey
Townsville, Queensland, Australia
BJ and I have been together since 2001, married in 2007 and have been TTC since October 2008. Even though we have had our struggles, the latest with fertility, I still believe we are very lucky to have each other.